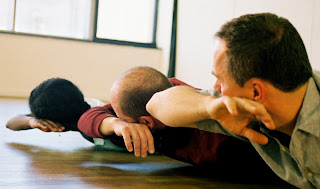 Often when working with students I am confronted with their immediate discomfort as well as their deeply entrenched habitual patterns. These are often one and the same, habitual patterns cause or contribute to pain and often pain creates or enforces inefficient habitual patterns. Hence, we can not deal with one without the other. Fortunately, The Feldenkrais Method doesn't see a person's current way of moving as wrong nor do we seek to eliminate students' movement patterns. We understand that the movement patterns people adopt served them at one point, may not serve them presently, but may serve them again in the future. So instead of trying to subtract these patterns, we investigate and offer alternative options that may be more efficient for a student's present needs. We seek to add options to the possible movement patterns available for each individual.

One example of this is a person's ability to turn when they have an injury or chronic pain in their lower back. When the pain is acute often it is aggravated by rotating the spine. Hence, it is understandable that people begin to hold the pelvis and lower back still when turning. Problems begin when this becomes habitual and continute to hold the pelvis and lower back still when no longer in pain. This will, most likely, create tension and further discomfort. So, you want to be able to rotate your full torso to the full extend that is comfortable, when possible. A Feldenkrais practitioner does not see the “holding of the pelvis and lower back” as a wrong choice, nor the idea of “full rotation” as right. There is only a “correct” way of moving in a given situation. When your lower back is in pain it is sometimes the “correct” thing to do to hold your lower torso still and when you are in less pain it is often “correct” to rotate your whole spine. Ideally each person is able to move back and forth between a number of options depending on how they are feeling, what they are doing and what is being asked of them.

The idea that almost no movement pattern is wrong, but each just represents another option that may be more or less ideal in a given situation is central to The Feldenkrais Method. Dr. Feldenkrais believed that each person needed at least three ways to do anything (turn, stand up, climb stairs, etc...). If you only have one option than you are compulsive and have no choice. If you have two choices you can really only say “yes” or “no” in a given situation, and this is too limiting and not really a choice. So, you need at least three options to really be able to make a choice and have freedom in any or every situation. And this is exactly what we aim to accomplish in both group and private Feldenkrais sessions.