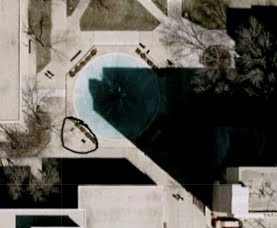 As I mentioned in my last post, I worked with Amii LeGendre this summer on her project Evidence - a solo performance created specifically for a single audience member. Again, in my last entry, I discussed the first solo I made for a fellow performer. The second solo I created was for a person I had never met, didn't know what she looked like and all I really knew about her was what she filled out on the questionnaire. It was a challenging work to create. Luckily she turned out to be awesome and we had a great time.

When I first got the questionnaire back from S. I read searching for a place to start - a clue on where to begin. In response to the questions "Recount a recent or reoccurring dream:" S. responded by writing "sometimes I dream of running around but never getting anywhere". Another questions asks "What do you love to watch?" and S. responded with "I love to watch the water at the lake or the river". These two responses came together in my mind to trigger the place for the solo and the first section. On the UWM campus there is a large circular fountain with benches around it (see photo, I circled the bench where S. sat) - that would be the place. I asked S. to arrive and sit on the bench and wait for me. Once she sat down I ran into the plaza, ran around the fountain 3 times and finally ran up to her saying, "I'm sorry I'm late I've just been running all day...". She laughed, which was good, because it was suppose to be kind of funny.

One of the strategies Amii taught us was to take a response from the questionnaire and see if it can connect to your life or history or experience in some way. From there you use your personal story to relate to the person you're whom your making the solo. Again, the response about enjoying being around water connected to my childhood. So I told S. they sotry of how my family owned a canoe as I was growing up and how we use to go out into the middle of the lake, swim off the side and have lunch. While I was telling her this story I folded her an origami boat which I gave to her. I tried to tie this specific task of folding the boat to my story to her response.

One other aspect of these solo that Amii asked us to explore was to build in a faluire. Do something you don't think will really work very well and then see how you and the audience member deals with that failure. I was thinking of this as I read S.'s response that the thing that frustrates her is having to do something she didn't know how to do. I thought of this man in San Fransisco whom I use to see at the beach balance very large stones on one another in almost impossible ways. He was like a Zen master in that it would take him forever to balance one stone on another and it took such patience to find that balancing point. I decided I would try to balance rocks in the same way even though I have no idea how to do it. As I tried to balance the rocks I told her the story of this guy (Bill Dan, it turns out is his name, see photos here).

Making and performing the solo felt like nothing I had done before - the immediacy of making it specifically for one person and then performing it only for them. As I mentioned I never met her before I performed it for her and I haven't had any contact with her since I've performed it. It is just this simple jewel of a thing that the two of us experienced together and located only in those 20 minutes.
Posted by DBurkholder at 2:39 PM No comments: