The week after a large production is always an interesting time. When I was younger I would certainly have alittle post-performance depression because after a week of intensity there was nothing to do (or it seemed that way). Now, since I have ongoing projects that overlap, there is not that same feeling, but it still is a shift in attention. I think right now it is an especially big shift since this last weekend was the end of "My ocean is never blue" - the only thing I've been working on for 3 years. I have some new projects coming up, but after such a monumental project there is a feeling of, I guess, melancholy. Just a touch of sadness that the project is over - I've lived it with it for so long and now I don't have to think about it anymore - I don't have to think about creating new sections, or rearranging the structure, or props, rehearsals or musicians. It is also a relief, of course. The only thing I have to do now is to reflect on whether the project was a success or not - or what was successful, what was not, what part of the process worked, what could have been clearer, stronger. This post-project process of reflection takes a while - we'll see what it brings...
Posted by DBurkholder at 9:58 AM No comments:

Beginning of the End

Tonight we had our first performance of what will be the last version of My ocean is never blue. My company has worked exclusively on this for 3 years and after many variations, in many venues we are going to let it rest. It has been a fascinating journey exploring water from multiple perspectives ranging from water's molecular structure to the scarcity of water, the Japanese Tea Ceremony and our Hurricane solos. We've performed it as a loosely structured 20 minute improv to a highly structured 55 minute work with a cast ranging from 5 dancers to 28 dancers in formal theatrical venues, studio performances and outdoor site-specific locations. And now, as I think back over the versions we've created and certainly the many people that have performed the work I am feeling melancholy about it ending. Usually you stop performing a work because you are ready for another challenge, to explore new material or find a new inspiration. This work - My ocean is never blue - has continually been a new thing to work on. Whether we are creating new sections, changing or deleting others, rearranging the structure, putting it in a new venue or adding new performers, it has always been shifting, transforming, and evolving. Even though we're performing the last version, it is not the final version nor the version - it is simply a version. One of my goals with My ocean is never blue was to never create an authoritative version of the work - and we haven't. Tomorrow night will be the last chance to see My ocean is never blue in any form and it will be the last time we will perform it. That thought both makes me smile and tear up some.
Posted by DBurkholder at 10:12 AM No comments: 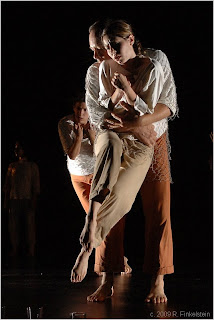 Today was our last rehearsal in the studio - yea! yikes! Monday morning Arachne Aerial Arts and I meet at 11am to rig their fabric for tomorrow night's first rehearsal in the theater. Today we ran through the piece from beginning to end without stopping and it went amazingly well - everyone mostly (mostly) knew what they were doing and doing it at the right time. We're still working on certain transitions (if I'm allowed to use that word) as well as clarifying intent in certain sections - but overall I think were getting there and right on track.
I've mentioned this before, but again, I find the hardest thing is the translation of language between the companies - I mean, we all speak english, but the language of intent, meaning & image is very different in post-modern dance, West African dance, Classical Indian dance and even aerial dance - in addition to the musicians. Each form - really everything - has its own short hand words and phrases for things that we don't often acknowledge or recognize on a day to day basis. So, when working with other forms all these short hands need to opened up and examined. One example is using just plain walking in the work - in post-modern work this is not uncommon and understood (at least by the performers) to have evolved out of a history of using common place movements in performance works. But when artists who don't know that history nor is it apart of their history then walking becomes something that you have to explain in some way or another. This process has been great for me as there are now many things that are apart of My ocean is never blue that would never have been apart of the work if it was just left up to me, or even my company. I look forward to performing all this work together on stage, with lights and an audience.
Posted by DBurkholder at 10:36 PM No comments: