The Chemistry of Lime Trees In NYC 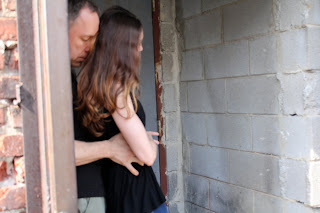 Tonight Susan, Stephanie are up in New York City to perform our newest work, The Chemistry of Lime Trees at the TriBeCa Performing Arts Center. We, along with Stefanie Quinones Bass, have been developing the work for over a year. The work is based on the true story of Bosko and Admiration from the Bosnian War of the early 90s. Boasko (a Christian) and Admira (a Muslim) fell in love while in high school, before the war. During the war they were shot and killed as they tried to cross from the Muslim side of the border to the Chriistian. It is still unclear who killed them.

In developing The Chemistry of Lime Trees we have explored bringing a theatrical approach to the work (more theatrical than my previous work). This means we are very concretely dealing with plot, characters and dialogue. No, it is not straight theater by any means. And, yes, there are sections that are more abstract, more dancey. But, overall we are characters more than we represent ourselves. This makes me nervous since my creative work is more straight dance with the performers being themselves, not "acting" as someone else. There have been many moments when I feel myself run up against my insecurities. But, I do know that Stephanie's dancing and Susan's sing are incredible - and that can't be a bad thing.

The performances are Thursday (6/9) and Friday (6/10) at 8p
At the TriBeCa Performing Arts Center. More info here. http://tribecapac.org/air.htm#lily
Posted by DBurkholder at 8:53 AM